Ramsey, MN — Connexus Energy today was honored with the top prize in a national electric service reliability competition a­mong electric utilities and solution providers. Judged by a group of deeply experienced and accomplished professionals, the Keep the Power On award, presented by The Cleanie Awards®, recognizes utilities that are committed to ensuring energy capacity meets demand in communities across the nation. [See the full list of award winners.]

Connexus’ grid is designed like a giant set of connected loops comprised of more than 6,000 miles of underground cable and 3,000 miles of overhead line. This is helpful during severe weather. When a break or fault occurs at one point on the line, the system design allows us to reduce the duration of an outage by re-routing power through a different line. From lineworkers to system engineers and designers, the women and men of Connexus Energy are working for our members to deliver and maintain a resilient electric grid.

On average Connexus members only experience one unplanned outage every 3.6 years. Connexus encourages all members to take control and sign up for proactive, automated notification of outages that impact electric service to their home or business.

News of the “Keep the Power On” award closely follows the Associated Press recognizing Connexus Energy’s leadership in solar land use practices in a major news story that generated more than 150 million media impressions nationwide. Connexus was the only electric utility included in the expansive story that also included interviews with scientists from the National Renewable Energy Laboratory.

Earlier this fall one of Minnesota’s award-winning filmmakers teamed up with Prairie Restorations on a short documentary, “Pollinators, Prairie, and Power” that included Connexus Energy CEO Greg Ridderbusch. Watch it now on Youtube.

Celebrating a culture of innovation and efficiency, Connexus Energy is one of the top ten utilities in number of members served per employee out of more than 1,800 electric systems nationwide. By embracing innovations including grid-scale battery storage, more than $25 million of local solar generation, customer-centric demand response programs, and automated metering infrastructure, Connexus has kept retail rates to our members flat while progressing with greening the grid.

Connexus Energy affirms its commitment to affordable electricity rates for 2022

Grocery Stores and the Dependable Energy of our Community 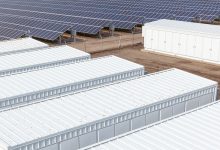